An Endicott couple is helping to feed the hungry — one box of cereal, jar of peanut butter and can of soup at a time.

Since mid-March, Amber and Bruce Gregory have run weekly food drives for the Community Hunger Outreach Warehouse (CHOW) at the Cinema Saver theater in Endicott, which they co-own and run. The theater remains closed for now due to the ongoing Covid-19 pandemic. To keep afloat financially until the state allows theaters to reopen, the couple sells curbside refreshments four days a week. They collect non-perishable food donations for CHOW during the curbside refreshment sales. 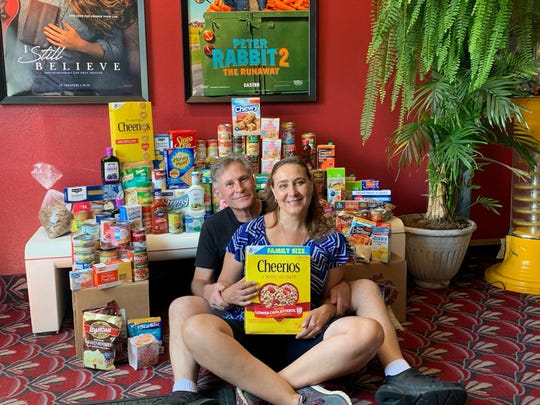 While the amount of donations vary from week to week, they usually collect enough to provide 500 meals for CHOW during the four-day food drives, Amber said. They have donated thousands of food items for CHOW over the past four months.

Every can of tuna, box of cereal and jar of peanut butter collected helps CHOW especially during the ongoing pandemic when CHOW has distributed about four times as much food as it normally does, said Les Aylesworth, director of CHOW/Broome Bounty. Many people have lost jobs during the pandemic and need help putting food on their tables. CHOW, which is run through the Broome County Council of Churches, has provided nearly a million meals to those in need since March.

“The need is definitely there,” he said.

The Gregorys are a big help to CHOW by collecting food every week, Aylesworth said.

“They’re just fantastic people who have a heart to help their community,” he said of the couple. “They’re not just talking about it. They’re putting it into action.”

While they’re happy to facilitate the food drives week after week, the couple gave the credit to customers who stop by to buy popcorn or a slushie and drop off a few cans or boxes of food, Amber said.

The Gregorys are no strangers to helping CHOW. They’ve done other food drives for CHOW in the past, Amber Gregory said.

“We have a long history with CHOW,” she said. “It’s a place that we know is tried and true. We know they get the food, and it goes right back out to the people.”

The couple has helped the community in other ways, too. They have allowed homeschool parents to use their theater, and have held special sensory friendly movie screenings for children with autism who have sensory issues.

The couple plans to continue holding the food drives even after their theater reopens. While New York is undergoing a phased reopening, it’s still not clear when theaters will be allowed to open again.

“We’re so happy to help,” Amber said. “We have been doing this for years and years. We always try to find ways to help out in the community.”