For more than 40 years, even when her health wasn’t the best, Minister Kathleen Yvonne “Kit” White would head to Binghamton University’s college-community radio station, WHRW.

Each Sunday morning she would engineer or host “Gospel Time!” a program dedicated to “the divine words and music of the black church.”

The show, which debuted in 1971, was the longest continuously running program on the non-commercial station. More than this, it was “part of the fabric of the community,” said the Rev. Dr. Greg Johnson, pastor at Cornerstone Community Church.

For 2 1/2 hours, White, with her smooth, motherly delivery, would combine gospel music with a sermon of encouragement and hope.

“It’s a ministry to me,” she once explained, “I do it as an expression of faith and to help others find faith and grow in faith.”

Kit’s own faith commitment went well beyond the Sunday morning broadcasts. It took her to the Broome County Correctional Facility where, for several decades, she ministered to inmates with compassion and tough love. She also served as associate minister at Cornerstone Community Church and Beautiful Plain Baptist Church.

In the process, Kit created “an enduring and endearing legacy,” Johnson said. “She was committed to her ministry and her faith,” he added. “I believe that commitment came out of her relationship with God.”

Kathleen “Kit” Yvonne White died May 2 at age 68. She had grown up in Harlem in the 1950s and 1960s and was part of a family of five brothers and three sisters. The neighborhood, at the time, was a tough one, plagued by a heroin epidemic and other urban ills, her brother, Charles White, said.

Kit White in the radio studio in Binghamton University’s Student Union from where she broadcast Gospel Time!

Kit’s father, Charles, worked several jobs, notably as a subway motorman and cab driver. Her mother, Gloria, stayed home to care for her family and exert family discipline. Education was mandatory, and seven of eight children would go to college. Kit left New York City after earning a scholarship to Binghamton University, an accomplishment that gave her a great deal of pride, her family said.

More: German-born Binghamton man, 64, ‘had a heart of gold’

Kit grew to love Binghamton University and the Broome County community. After earning a degree in sociology, she stayed here and put down roots. Family members would kid her that she had become “Miss Binghamton,” Olga White, one of her sisters remembered.

“Gospel Time!” went on the air when Ernestine Williams, another BU student, proposed a gospel music show. Kit, at Williams’ request, signed on as engineer.

In Kit White’s family, education was a high priority.

In a 2004 Press & Sun-Bulletin interview, she acknowledged she was a “cultural Christian,” not a deep believer, at the time. That changed with a couple of life experiences, including a near-death incident and the breakup of a serious relationship with a man she had been dating.

“When they broke up, she went inside herself. Calling on the Gospel was important to her. She embraced it,” Olga White said.

Kit was also inspired by a matriarchal aunt who was a preacher at a church in Harlem, and her older brother, Andrew, a U.S. Navy petty officer, who became a counselor to prison inmates, including some on death row.

“Faith replaced education as the primary force in her life. Education remained important, but in conjunction with something bigger,” Charles White said.

In a very real way, ministering to others became Kit’s life work, Olga White added: “She never married or had kids. She put all her attention and energy into that.”

While Kit became the recognizable voice of “Gospel Time!,” she was not its first host.

When the program debuted, organizers felt it should have a male host, so Kit worked behind the scenes as the show’s engineer. She moved into the on-air role in the 1980s because, as she once jokingly said, “we ran out of male hosts.”

The Binghamton woman had a clear set of priorities for the program. She worked for hours each week preparing a sermon and coordinating music with the sermon’s theme.

“It wasn’t just about playing music. It was about presenting the Word in music,” said Ralph Williams, a close friend who called Kit an “adopted grandmother” for his, and his wife’s, four children.

Listeners would hear a wide range of styles from traditional gospel to urban contemporary gospel. But the music had to fit Kit’s exacting standards of “glorifying God” and being true to the Scriptures.

These exacting standards carried over to other aspects of Kit’s life.

“She was tremendously opinionated and didn’t hold back any words whether they were positive or negative,” said Raymond White, one of her brothers. “That could get under people’s skin at times, but also be inspirational at times.”

For example, family members recalled their brother’s funeral when Kit talked about his drug addiction, and the epidemic of drug addiction in general. “Some people commended her afterwards. Others felt it was not appropriate. She didn’t care. She felt it needed to be mentioned,” Charles White said.

Kit was a commanding presence, agreed the Rev. Cris Mogenson, chaplain at the Broome County jail. She had a no-nonsense way and took the word of God seriously, especially Christ’s commandment in Matthew 25, to minister to those in prison, and in need.

In addition to volunteering at the jail, Kit was a committee member with the Broome County Council of Churches’ Jail Ministry Program. “She loved them (the inmates) and encouraged them” while, at the same time, “not putting up with any nonsense if they tried to dance around her. She held them accountable,” Mogenson said.

The approach made a difference in some lives. One former inmate, who spoke at Kit’s funeral, remembered how Kit pushed her to clean up her act and stay off drugs. She’s been off drugs for 13 years, the woman told the congregation. 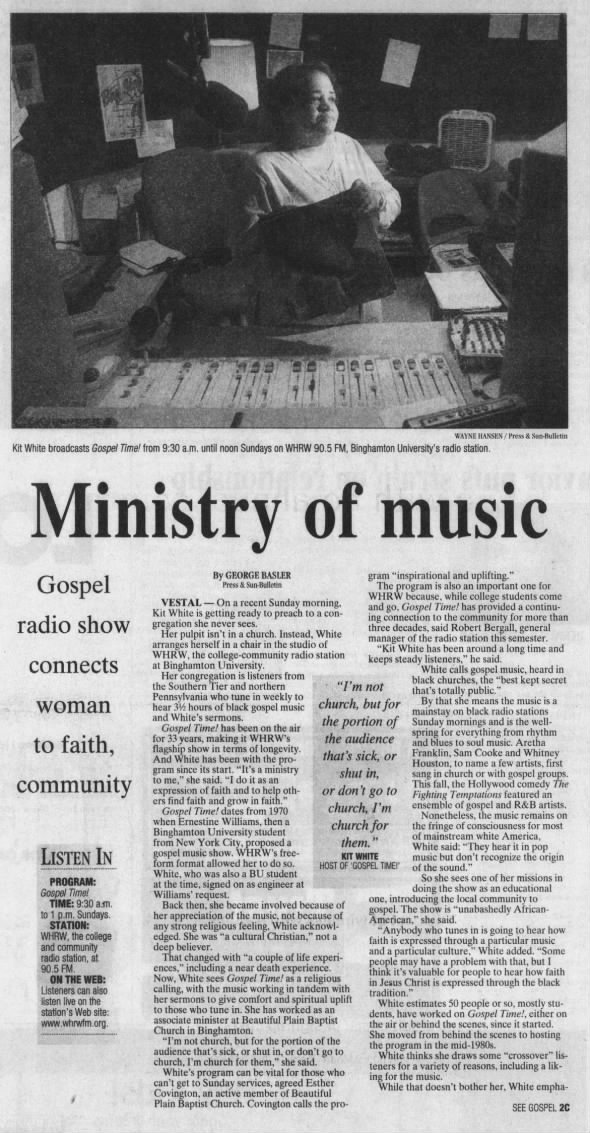 In recent years, Kit walked with a cane. She was plagued by high blood pressure and heart problems. But that rarely stopped her weekly treks to WHRW for “Gospel Time!”

“The program was unabashedly African-American,” she said in a 2004 interview, noting: “Some people may have a problem with that, but I think it’s valuable for people to hear how faith in Jesus Christ is expressed through the black tradition.”

For some listeners, the program was a way to stay in touch with their heritage. For others, notably the sick or shut-ins, it was a way to hear the Gospel on Sundays when they couldn’t get to church.

“Kit was always proud of the fact that her show brought people together,” Jeffrey Goldberg, interim general manager at WHRW, wrote in an email. “She told us frequently how important it was for the black community in the Southern Tier to have a voice like hers on a weekly basis to find solace.”

Kit was someone who would always be there if you needed someone to talk to, or pray with, said Williams, her long-time friend. “She ministered to people you don’t normally think about. That was her ministry,” Mary Roney, another friend, added.

Raymond White remembered how every family member would receive special Christmas and birthday cards from Kit each year. “Whether spoken, or not, she continued to think about us,” he said.

Goldberg remembered how Kit was more than happy just to talk to anyone and pass on her expertise to new apprentices at the station. “I look back wondering how my first friend in college was a 65-year-old Baptist minister,” he wrote, humorously.

“Kit will forever be in our hearts,” he concluded. “Nothing will be able to top the peacefulness of waking up on a Sunday morning to the voice of Minister Kit White.”

Kathleen “Kit” Yvonne White is survived by her siblings, Charles (Eileen) White, Olga White and Raymond White; one sister-in-law, Patricia White Patterson; 12 nieces and nephews; 10 great-nieces and -nephews, and a host of cousins.