I DID IT HIS WAY! 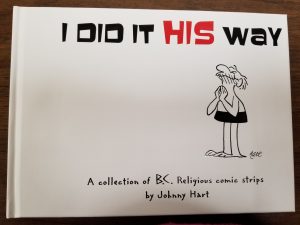 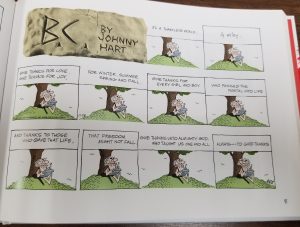 I DID IT HIS WAY!

When thinking of the B.C. comic strips, Johnny Hart comes to mind.  He has captivated many readers over the years.  He created B. C. in 1957 and began appearing in national daily newspapers in 1958, according to Lambiek Comiclopedia. Hart has received numerous awards for his work on B.C. between the years of 1967 through 2002.  In 2009, to honor the memory of Johnny Hart, the Book “I Did It HIS Way” was created as a collection of his B.C. Religious comic strip. The Broome County Council of Churches is in possession of 23 of these books.  We would like to offer them to anyone interested, on a first come, first serve basis.  If you are interested in owning of these books, please contact Barbara Cook at bcook@broomecouncil.net to reserve your copy and to make arrangements for book pickup.
Thank you!