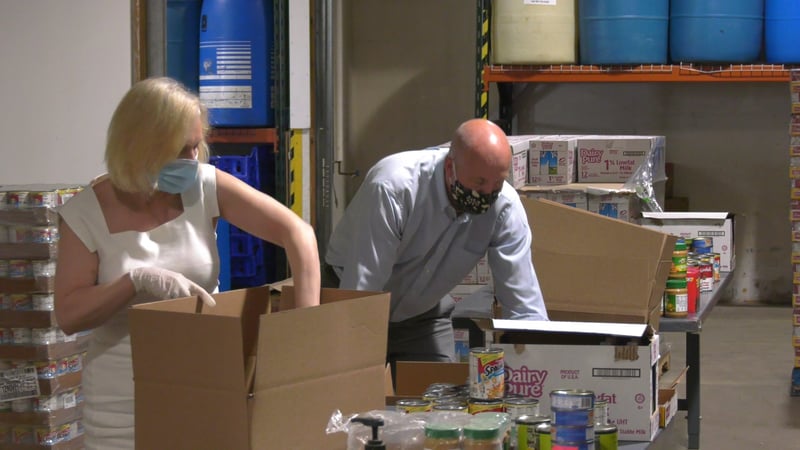 Senator Kirsten Gillibrand was at Binghamton’s CHOW today volunteering to pack up emergency food boxes and discuss a new bill that looks to solve 2 problems at once in the fight against food insecurity.

During the COVID-19 pandemic Binghamton’s CHOW has provided over 9,000 emergency food boxes and over 1 million meals to families in need. Despite their best efforts, CHOW Director Les Aylesworth says there’s families still struggling with food insecurity and it’s not due to a lack of food.

“The food is out there, the fact that farmers are having to dump milk and throw away potatoes, produce and what not tells us there’s food out there,” says Aylesworth. “It’s getting the food from the producers to the people who need it. It’s that line that’s challenging.”

To address this disruption in the food chain caused by the pandemic, Senator Kirsten Gillibrand introduced the Food Bank Access to Farm Fresh Produce Act. The bill would provide 8 billion dollars in federal block grants for food banks to use to purchase fresh produce from producers. It would also cover food banks increased operational costs and increased cold storage capacity.

“I just think this is the kind of common sense solution that will get traction,” says Gillibrand. “Hunger is everywhere, not just New York, not just Upstate New York, it’s everywhere. We need to make sure that every community has the resources to feed families.”

Gillibrand says that they have around 6 bills proposed that address food insecurity including a focus on increasing SNAP benefits. She says it’s the Food Banks though that are on the front lines working to solve this major problem.

“These are very dark times,” says Gillibrand. “What’s being done here at CHOW is a bright light for all of us to see and to give to hope to the community and families that don’t have access to enough food.”

Aylesworth says CHOW is always accepting non-perishable food donations. He also says those looking to help can make a monetary donation on their website https://broomecouncil.net/chow/how-you-can-help/ or they can contact them about volunteering opportunities.